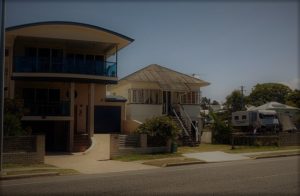 Just a quick recap on my last (and first/introductory) post; I had bought this yew bewt investment property with some faults that I was totally confident in being able to repair and renovate myself, saving heaps of bucks and in the end once rented out this place would give a decent return.

Not so. First issues were that I couldn’t decide on where to begin repairing and renovating. However, once I got passed my indecision and procrastination, I started looking at the roof. Figuring that the roof is probably one of the most important parts of a building, it made sense to get that sorted first. I was faced with broken tiles, dislodged tiles, dirty and moss ridden tiles – and it just totally looked terrible.

So I grab the ladder, get up on the roof and conquer my fear of heights. Once on the roof I was okay. The height was the least of my problems. I was facing what looked to me like a roof hit by a meteorite, an atom bomb, and a teenage boy with a hatred against roofs.

Yep, as always, things were worse than they first appeared. My first thought was that this roof could not be water tight so I climbed back down the ladder to go inside and check ceilings and walls for water damage. How did I not notice this when I initially inspected the house – yep, water has been pooling on the ceiling, there’s water marks throughout and then my heart sank. Water damage in the roof. Nothing worse. Perhaps time to call in the professionals.

So as you do in these situations, I’ve turned to a mate and asked him if he knew of any decent roofing companies. Straight up, he recommended Roof Restoration Newcastle.

Not ever heard of them before but if it’s a mate’s recommendation you’ve got to run with that.

I called them up, and wow. The owner, Dave Beach, answered the phone and was both sympathetic and professional in his advice. Not once did I get the feeling he was trying to take me for a ride, he never tried to tell me that my problems are going to warrant a re-roof and potentially a rebuild of the whole house as some of these guys try to get you into.

So booked an inspection with Dave, and yet again, blown away as he turned up as expected, on time – another rarity for tradies. Dave took no time to get up on the roof, carried out his analysis and then he got inside the roof to further check out what was happening.

During this time I start getting a bit nervous, particularly because he is taking so long. The longer he takes the more problems I have right? Nah… I learnt that this is just him being very thorough and working on providing me the most accurate report he can. Given that I might not even engage his company, this is an impressive gesture.

After the inspection, he spent time with me discussing his findings. And I wasn’t too surprised. Apart from technical issues that I would never have known about, he didn’t present too much to me that I wasn’t aware of. So, hey, in my mind this guy’s a winner – he’s not trying to sell me a new roof, house and block of land to go with it.

So after his report and quote, which I was quite happy with, I did some research into his company. His website, aptly named Roof Restoration Newcastle, provides useful information about the services Dave provides, and the areas they cover.

Just in case you need some roof work, here’s a list of their services and you’ll find a link to their website somewhere in this post;

They also will carry work out on all types of roofs including metal roofs, tiled roofs, and colorbond roofs.

Areas serviced include Newcastle, Port Macquarie, and the Hunter Valley.

After being suitably impressed by the professionalism and price, I decided to engage Dave Beach and his team from Roof Restoration Newcastle to carry out the necessary repairs to my roof. Dave assured me his work would be guaranteed and also backed by a 10 year limited warranty.

A short period later and they were into it. Now I can’t explain the details of the work they did, mostly because I don’t know as clearly I’m no roofing expert, however the inspection of the work completed that Dave took me through was more than impressive.

The guys got the work done in an impressive amount of time, which obviously helps me because that’s one more thing off my list of projects that need to be done to my new found investment. Equally impressive was the lack of “hidden surprises” – the bill came to the amount which was quoted. And what’s more, the guys even cleaned up after themselves.

So all in all, I was highly impressed with my mates recommendation and the professionalism of this company.

First step into fixing my poor investment home has been a success, thanks for the help from Dave Beach and his team.

For those interested and/or needing some roof work done, here’s the link to their website – Roof Restoration Newcastle.